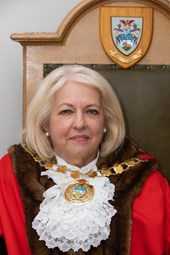 Each year at the Annual Meeting, the Council appoints a new Mayor and Deputy Mayor from among the 54 Council Members.

The Mayor and Deputy Mayor, and their Mayoresses/consorts, attend a variety of civic functions during the year to represent West Lancashire.

The current Mayor is Cllr Mrs Marilyn Westley, who represents Aughton Park ward. She will serve as Mayor until May 2023.

One of the other important roles the Mayor has is to raise money for their chosen charities. The Mayor's charities for this year will be announced shortly.

How to invite the Mayor to an event

If you're interested in inviting the Mayor or Deputy Mayor to attend an official event - please fill in the Mayoral Engagement Form below.

Please contact the Mayor's Office by email - jill.ryan@westlancs.gov.uk if you require any further assistance.

Information for where you live